Work that counts toward Achievement Awards

CAMPAIGN CALLING: Include all calls for any political activities, such as initiatives or ballot questions. Dialing apps will record the number of calls you have made, or you can use your best estimate

POLITICAL HOURS: When in doubt, count the hour Include (where applicable):

Hours collected are on a best estimate basis. Round up to the closest whole hour. Primary and Associate member hours should be counted. All volunteer political activities, whether paid or unpaid (Example: paid election worker or poll watcher), are eligible. Individuals who are salaried campaign and/or GOP professional staff do not qualify (i.e., those who earn their living by being employed in politics). 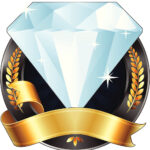 At a recent executive board meeting President Sherese Settelmeyer reported  that once again this year our club took home a Diamond Award at the National Federation of Republican Women Conference in Orlando, Florida in September.  She thanked Mary Burgoon, Achievement Award Chair, for keeping track of volunteer hours and submitting the necessary reports.   All the hard working members who put in those hours each year were lauded for their outstanding effort.  Our teamwork has resulted in the CCRW consistently receiving the annual Diamond Award.

The Achievement Awards are designed to enhance teamwork among members of each of our 17 clubs in Nevada.  Volunteers submit worksheets listing all club activities performed, i.e.,, membership, development, program, leadership development, campaign activities and community relations can be counted.  The current period (ending May 10, 2021)  covered 2020 & 2021 and included any functions planned for the remainder of the year.
There are four levels of achievement:

NOTE: Carson City has consistently received the Diamond Award. Please help us achieve this honor again by reporting all your volunteer hours. Contact chairperson Mary Burgoon at: [email protected] or 775-315-0993 for any questions.

The Campaign Award Program is an effective tool to demonstrate the power of Republican Federated Women at the local, state and national levels. The program honors Clubs and State Federations that spend tremendous amounts of time volunteering (non–paid) for our Republican Party, our Republican candidates, and our Federation of Republican Women,

The following policy details which activities can be included in your volunteer campaign hours:

THIS IS AN AWARD GIVEN FOR “POLITICAL CAMPAIGN” TIME. IT DOES NOT include time for charitable, civic or anything other than volunteer time given as detailed herein. It does NOT include time spent on other NFRW programs that are not related to working on campaigns. Please check with the Achievement Awards Chairman to see if charitable, civic and other volunteer time fits within one of the Achievement Awards categories.